PSA: This also gets into a bit of a “needle review”, which is to say I might say some unpopular things about knitting needle brands and people who feel like if I’m not knitting with $400 needles I’m not doing it right. You have been warned.

SO has been really into cardigans lately and since it is allegedly going to be summer soon, I thought that making wool cardigans for someone seemed a bit silly. Thanks to my binge listening to the KnitPicks podcast, I’d been seriously itching to knit with their cotton/linen yarn blend “CotLin”. I don’t really know why, but the podcast made it sound like such an amazing and exciting yarn and since I was thinking about summer knitting (who are we kidding here, I made a worsted weight, all wool, 4th Doctor scarf during the duration of last July/August…summer knitting isn’t a thing I think about) and I was thinking I should make some things out of cotton yarn (which I’ve never used before) and CotLin seemed fun.

I had to wait for the backordered black Palette to come in (Night’s Watch hat!), but as soon as it was ready I pulled SO in and we sat down and picked out colours for the cardigan. There was no question that a navy blue was going to be involved, but we spent a fair bit of time going over the various greys and brown colours and finally settled on “Cashew” and “Planetarium” (the cardigan is done with wide stripes—12 rows high with a gauge of 6 rows per inch). I waited for the yarn to come and then I got swatching.

The first thing I noticed while knitting the swatch was that although this yarn claims to be a DK weight, it’s very thin. I think it’s just spun very tightly, but when I put it up next to a strand of Palette, the CotLin strand is just about bigger than the Palette strand. That said, the pattern (which is written for DK weight yarn, although not cotton DK weight yarn…more on that when I talk about the cardigan) called for 4.5sts = 1” and 6 rows = 1” over stockinette stitch using US 7 needle and after washing and blocking the swatch, that’s what I got, so I’m rolling with it.

The second thing I noticed is that cotton yarn is strange. Or, rather, it’s strange compared to anything else I’ve ever knit with (which is basically acrylic and various wools). It feels like knitting with macrame thread (for all I know it basically *is* like knitting with macrame thread) as it slides through my hands. I’ve gotten used to it after knitting about a quarter of a cardigan, but for a while, especially since I’ve been switching between that, Malabrigo Rios (which is ridiculously soft superwash merino), KnitPicks Brava acrylic, and Knit Picks Palette, the CotLin just felt bizarre in my hands. Once it’s knitted, it’s actually rather soft, but it feels very stiff as I knit it and the fact that it has next to no memory (it doesn’t spring around or squish or anything) is still odd for me.

The third thing I noticed is that this yarn is terrible when knitted on aluminum needles. I was dropping stitches all over the place. The cotton yarn is slicker than wool and because it doesn’t have the fibre memory, it doesn’t grip the needles the way I’m used to. I have a Boye interchangeable needle set (this is where my potentially unpopular opinions on needles start…you have been warned) that I use almost exclusively to knit things. If I don’t use those, it’s because the cables disconnect from the needle tips and on certain projects (Palette on size 3) that means the yarn gets stuck in the connectors, so I’ve purchased a stand-alone Boye circular needle for that. In many cases, I also own the straight needles. Problem is, I somehow managed to lose ONE US7 straight needle (which was the reason I was gifted the Boye set in the first place because I was knitting a lot of things on US7 and I had ONE NEEDLE and no circulars). I do own wood DPNs (mainly Clovers) and I own them in a US7, but this cardigan called for me to cast on 150+ stitches and it’s not knit in the round (because it’s a cardigan), so I wasn’t going to use DPNs.

Here are my needle thoughts. Yes. I just admitted to you that I literally knit everything on US$8 aluminum needles from the craft store. Everything. Unless it needs to be on a DPN and then I knit it on US$10 bamboo DPNs unless I have caved to pressures of ergodynamics and bought myself square Knitter’s Pride Cubics rosewood US3 DPNs (which, lbr, were also $10 DPNs) because all the hats I make are finished on US3 DPNs and I own NO US3 DPNs at all (been finishing them on US5s. I’m lazy and cheap, what?). I’ve been using those to knit my Evenstar Gloves, and I like them, but really can’t tell much of a difference between them and the Clovers I usually use. So, okay, let’s discuss this.

Whenever I hear someone saying that one needs to buy only Hiya Hiya or only ChiaoGoo or ABSOLUTELY ONLY Signature needles, I sort of stop listening to them. I admit that the cables on my Boye circular set are pretty stiff, and if I use anything other than the two biggest sizes I basically can’t use them because the cables are too stiff to bend properly. I admit that the junctions routinely come unspun and I have to respin the tips on at the end of rows. But you know what, I’m actually okay with that. A friend gifted me the set for free and it has all the things I need and I’ve knitted some truly amazing things with so-called “worthless needles”. I once heard someone say that if you paid so little for a needle that you feel no remorse giving it away, it wasn’t worth knitting on in the first place. I’m calling bullshit on that. I knit on “worthless” Boye aluminum needles and I knit with a bunch of “horrible” acrylic yarn and I do some really fucking fantastic work. So there.

Anyway, the point of this is that I was dropping stitches all over the place and quickly realized I needed bamboo circulars. I’d been at JoAnn to buy fabric (I needed the Marvel licensed fabric and they routinely carry it), but I didn’t have the swatch done for the CotLin, so I didn’t yet know what size needles I would need, so I didn’t purchase any. Thankfully, the same friend who gifted me the Boye set also has bamboo circs in just about every size. So, I started the ribbing on my US6 Boye aluminums and then moved to the size 7 for the rows and just dealt with it until she came by on Sunday and saved me with the bamboo. You can definitely tell that the first stripe had a lot more fixes done to it if you look at it closely, but SO is okay with it and I’m hoping after a wash/block you won’t even be able to tell.

In summary: It’s too soon for me to tell what exactly I think about the CotLin, but now that I have the proper needles I’m finding it much easier to knit. I’m worried about proper drape on the cardigan once it’s finished, and I’m not convinced it’s going to hold shaping well through the sleeves, but I’ll be certain to keep you all posted through the process.

Sorry this got long. I will leave you with a quick photo of the CotLin cardigan as it currently stands.

FO "Friday": It's Bigger Than I Am 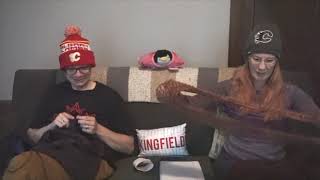 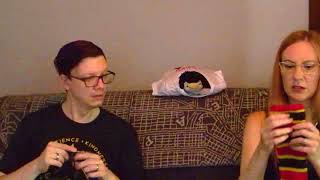 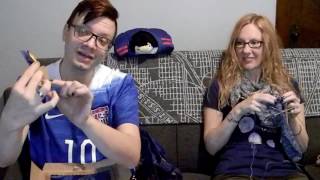 Glacial Knits Podcast Episode 6: We Did the Thing!